Introducing our new eBook, Architecting for the Internet of Things

Introducing our new eBook, Architecting for the Internet of Things

Ryan Betts is one of Volt Active Data’s founding developers, and is currently our CTO. He’s been designing and building distributed systems and high-performance infrastructure software for almost 20 years. Chances are, if you’ve used the Internet, some of your ones and zeros passed through a slice of code he wrote or tested. We’re pleased to announce that Ryan, always a thought leader, has written a new eBook for O’Reilly Media titled, “Architecting for the Internet of Things: Making the Most of the Convergence of Big Data, Fast Data, and Cloud.”

In his work with our customers and prospects, and in his discussions with his peers at Volt Active Data and in the larger data management world, Ryan has developed a distinct point of view on the Internet of Things (IoT). IoT today is where ‘Big Data’ was five years ago – a buzzword that launched a thousand dubious projects, and not always well understood. With Ryan’s eBook as a frame of reference it’s possible to put IoT into perspective.

The central theme is compelling – with IoT today we are seeing a convergence of three powerful trends: Big Data, Cloud, and Fast Data. This convergence is similar to evolutions we’ve seen before in automobile manufacturing, in electrification, and in the development of modern communications technology. Large vertical towers of capabilities are leaning together towards the Internet of Things: machine-to-machine communications, big data, cloud computing, distributed systems, networking, mobile and telco, apps, and smart devices are all converging and contributing to an IoT reference architecture. What Ryan explores in this eBook is the critical role that operational databases play in that convergence.

Read the book for a comprehensive explanation of how operational databases function in an IoT infrastructure, enabling IoT applications to fulfill four data management capabilities:

We are beginning to see a world where different industries and technology architectures are converging into one relatively consistent architecture that is being adopted across multiple implementations, including IoT. If you want to keep up with this evolution and learn more in-depth about architecting for the IoT, download a PDF of the book today. And as always, let us know what you think. 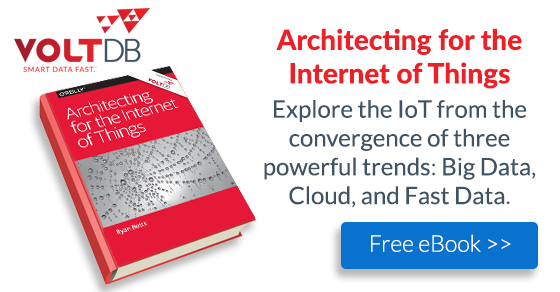 A Question of Degree: Thoughts from the In-Memory Computing Summit